I kind of can’t believe that I feel the need to write this post.

As some of you know we are having an election in Ontario.

For those of you who don’t know, Ontario is the province with the largest population in Canada.  We have a parliamentary system in Canada so we vote for our local representatives – in this case, Members of Provincial Parliament or MPP’s and the person who controls the majority of the seats in the legislature – typically the leader of the party that wins the majority of the seats – serves as the Premier until the next election. We have a multi-party system in Ontario and Canada, although typically there are only three that secure enough votes to win seats in the legislature, The Progressive Conservatives (Conservatives nationally), Liberals, and the New Democratic Party (NDP).

The outcomes of our current provincial election is a bit of a toss up. Polls are showing a virtual tie and depending on the pollster, the party in the lead varies. I have heard and read comments from a number of people stating that they are considering not voting or declining their ballots this time around because they don’t know who to choose.

This is a lazy position to take. 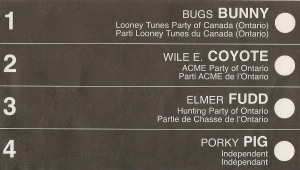 Marking an X beside your preferred choice is the easy part. Making the decision about where to put that X requires some thought.

We are very fortunate in Canada.  We are generally well off compared to large parts of the world. We have a good education system, publicly funded healthcare that meets the majority of our medical needs. Our justice system is fair and generally free from political influence. We have freedom of speech and can make our views known without significant risk of ending up in jail as a result. Our governments at all levels are generally free from corruption. Crime rates are low and falling. Our economy is in good shape and while there are certainly people who live in poverty, most Canadians enjoy a pretty good standard of living. We live in a country at peace. My Daughters will grow up to be whatever they choose to be. There are exceptions to all of these things of course.

We do poorly by the aboriginal peoples in Canada. We don’t do enough to give a hand up to those who need extra assistance. Our health system is not perfect and is in need of reform. Corruption does exist, although not nearly to the same extent as what I hear and read about other countries in the world. People do periodically end up in jail following a protest demonstration – although most are released relatively quickly without charge.

So to elections and voting. I have voted in every election since I turned 18, including those to select student leaders, with one exception. I missed one federal election because I was in the bush treeplanting at the time. I have put my name on the ballot twice – once for school board trustee and once for a student leadership position.

I grew up in a house and an extended family where politics and issues of the day were discussed around the dinner table. My grandfather was a municipal politician in Metro Toronto (actually in Etobicoke long before the brothers Ford appeared on the scene). He was also a union leader. My mother, aunt and uncle are or were also all members of various unions and my mother held a few leadership roles in her union. I grew up hearing stories about my grandparents going door-to-door to raise money for the construction of a hospital in the area and the work my grandfather did to improve the lives of union members and his community. My mother has long been a committed volunteer and activist who has worked and spoken on a wide-range of issues to improve her community.

My first experience with elections – that I can remember – was walking with my mother to the polling station where she was going to vote in the 1984 federal election. I remember telling her that I thought she should vote for Brian Mulroney (the leader of the Progressive Conservative party and eventual winner) because he hadn’t had a turn yet. I was 9 and that was the end of my brief flirtation as a supporter of any of the incarnations of conservative parties in Canada. I don’t know who my mother voted for in that election, but I am reasonably certain that she did not take my advice. 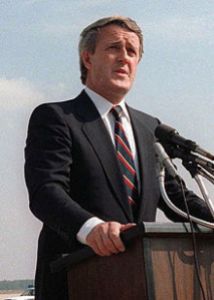 My next involvement was in the 1993 Federal election – the first one in which I could vote. This time I was involved as a journalist. I wrote pieces for the local paper. We had a lot of candidates running in our riding that year. I think there were 13 of them. I decided to interview all of them and write an article – which was quite long – detailing the highlights of their answers to my questions. They were all gracious enough to grant me interviews – I think there may have been one or two that  were non-responsive to my request.

The following year I was in my last year of high school and I felt that the people running for school board trustee in the municipal election were completely uninformed about what was happening in the schools so I put my name forward and ran for school board trustee. I was 19 at the time and the youngest person running in the elections that year in Ontario. As a result I got plenty of free media coverage. There were 19 of us running for 13 or 14 spots – if memory serves me correctly. I beat one incumbent and was within a couple of hundred votes of getting elected. Not bad for a first run and on a $50 campaign that did not include any door knocking. Plus I looked like a hippy with shoulder length hair and could generally be found in Birkenstock sandals. As a fun fact one of the people I ran against is now the Minister of Education in Ontario so history in Ontario could have been altered had I been elected instead of her. Although I wasn’t particularly close to her in the vote count.

Since then I have had the opportunity to win an election as a student representative in university, work as a political advisor to a minister in the Ontario Government and knock on thousands and thousands of doors in municipal, provincial and federal elections.

Throughout all of these activities I have had the opportunity to meet and get to know hundreds of politicians and would-be politicians. Virtually all of them have been honourable people seeking election for the right reasons. They all wanted to make a difference in their communities. They all saw politics as a way to do that. I have certainly not agreed with all of their positions and quite a few of them have been uninformed and unprepared for the journey they were embarking on. The majority have been great people who have used their positions to do what they set out to do – make a difference.

Some people say that voting doesn’t make a difference and that all politicians are the same. Others feel that it is ok to hurl abuse at those seeking or in office. Some people seem to feel that politicians are not regular people at all, but a greedy, self-serving, power-hungry bunch who don’t care for or understand the lives of non-politicians. In my experience all of these are incorrect or unfair.

Who are politicians? They are us. They are people who decide to step up. They are mums who are fed up with challenges they encounter as entrepreneurs, they are dads who are passionate about education, they are sons and daughters who see challenges being faced by their parents, they are people who want to see their governments do more to reduce greenhouse emissions, they are business leaders who want to improve the foundation provided by government for economic growth. They come from all walks of life and they all have one thing in common – they seek public service as an opportunity to make a difference.

So why do I vote and why do I see choosing not to or declining a ballot as lazy?

Those who don’t vote are lazy. Whether they don’t vote because they forgot to, didn’t bother to or couldn’t make up up their mind didn’t try hard enough. We have choice and a lot of it in Canada. In the riding where I currently live I have a choice of seven candidates from seven different parties. Some are more likely than others to get elected and some parties are more likely than others to form government. The ones that are likely could change depending on how many people come out to vote and who they vote for. For example there are just over 87,000 eligible voters in this riding. In the by-election to fill the seat last summer just over 35,000 people voted in an election that was won by about 1300 votes. If the other 50,00 people had come out to vote and had voted for the guy who got 58 votes in that election, the race in this election would be quite different.

Anyone who doesn’t like the options on offer can put his/her name on the ballot and make the effort to tell people why they are the better choice. It is true that campaigns cost money. As a result candidates either need to put up some of their own money to run a campaign. They can also do what many of the other campaigns do – convince other people to show their support by donating money to help fund the campaign.

Votes matter. This particular election looks like it will be close. Some of the parties are offering significantly different futures for the province. If you don’t vote because you couldn’t make up your mind and you get a government that you don’t like, there is no one to blame but yourself. If you don’t like what the major parties are offering, pick one of the minor parties or an independent candidate. The most important thing is to make a choice and cast your vote. No vote is wasted. Every votes makes a statement about priorities and preferences. In some ridings races are won by less than 100 votes. Minor candidates become major candidates when people vote for them.

The election is on Thursday, you still have lots of time to read the party platforms, learn about your local candidates and make a choice. Think about the future you want to have and figure out who best represents that future. No party is perfect, no platform is perfect. You don’t have to find one that meets all of your expectations, just the one that is better than the alternatives.

This site uses Akismet to reduce spam. Learn how your comment data is processed.

Chris Farley Ratcliffe is dad to three girls and writes about fatherhood, kids and current affairs. His superpowers include removing loose teeth on request and carrying more than one kid at a time. Read More…

Skating in the woods!

Doing some #tool and #workshop organizing as I get

The #snowbirds swing by and circled around our pla

I talked to #mothernature through frozen lips this

I’m sorry #ottawa. I left my snow tires on speci

We use cookies to ensure that we give you the best experience on our website. If you continue to use this site we will assume that you are happy with it.OkNo